Last night was the coldest since I landed at Gangler’s camp. My thermometer stops at -40 and the fine red line was bellow this mark. I had the oil heater up a notch to #3, the windows were frosting up and I was wearing a sweater reading in bed. This morning, as I write, I have my first blizzard with the wind gusts blowing snow off tree branches and huge snowflakes swirling from the sky. Looks like it’s blowing from the south east but hard to tell. Temperature is now -25 but the wind chill is significant. 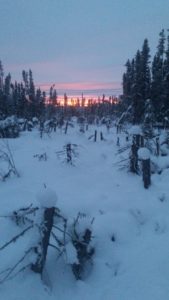 Dramatic change of weather early this morning. At -13 I’ve got my heater down to the lowest setting without the flame going out. It’s a different story outside with a north-west wind making it feel much colder.  Also light snow falling.

Wind died down. Sun came out. Got some power from the solar panels. Fired up the snowmobile and groomed my trails around camp, which had completely drifted over. As the sun sets, the temperature is dipping and I’m settling in for the evening. I’ve got wild rice & mushrooms, a tuna veggie dish and blueberry pie on the menu for Christmas dinner. I’m expecting Santa C. to stop in on his way home.

I looked at my menu that I wrote yesterday, ended up having eggs on toast. Ha! I took at an early morning walk to the airstrip  and watched the sun rise, well the cloud colors anyways (photos 7&8 below). It’s overcast with light snow and minus 28 c. It looks like it might clear up as I see some faint blue sky on the horizon.

I checked the voltage on solar batteries, 49.9v very good. Pumped some gas from barrel to tanks & jerry can and topped off generator and skidoo, adding appropriate additives. Fed the birds.  Great, all chores done for now, so I’ll send off this blog. 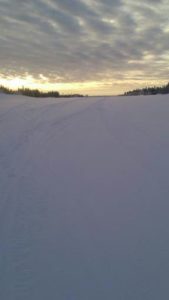