TALES OF A WINTERMAN APRIL 20

The big day arrived ! Our winter caretaker Jacques finally returned to civilization. After 6 months in the Manitoba bush, the 185 on skis arrived to whisk him back to Flin Flon.

“I knew it would be somewhat of a culture shock, but I didn’t expect the intensity of the experience. It’s hard to pinpoint what it is, but I suspect it has to do with the “time” program, making multiple decisions at once, planning ahead, the speed of everything, people in a muddle regarding the virus… A friend simply said that I needed time for my brain to re-adjust, back in the hustle & bustle so to speak.

My flight out of camp was really sweet. Best bush flight I’ve ever had in the smallest aircraft! So small that I helped the pilot push the plane into its parking lot at the Flin Flon airport.

I’ve arrived at my destination in southern Manitoba. Thank you readers for following this newsletter and I will catch up with you later, hopefully next winter for another caretaker season. 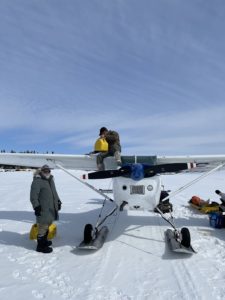 Jacques waits as his plane refuels for the return to civilization 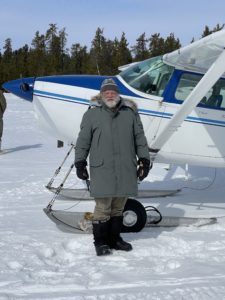