What is the Aurora Borealis?
The scientific explanation

Charged particles from the sun travel to earth and hit the atmosphere interacting with the atoms. The electrons in the atoms become active and speed up. As these atoms slow down again they release a photon or light. 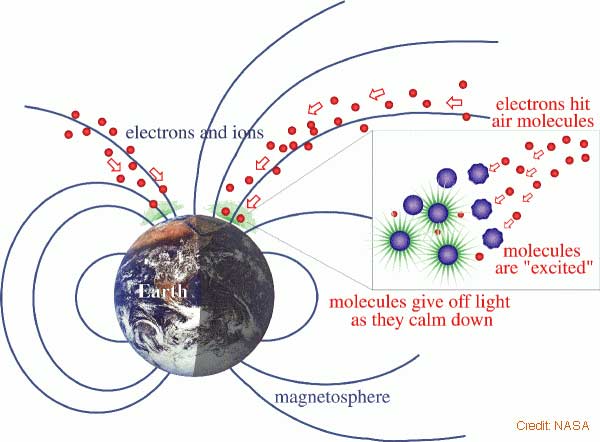 The sun erupts with solar storms which send gusts of charged particles on solar winds out into the solar system. At speeds of up to 1 million miles per hour, these particles arrive at the earth’s outer atmosphere in as little as 4 days. Upon entering the earth’s atmosphere they strike air molecules, exciting the atoms’ electrons and bringing them into a state of high-energy. Electrons in the nucleus of the atom move to a higher-energy orbit around the nucleus. When these electrons slow down and move closer to the nucleus in a tighter orbit, they release a particle of light or photons. We see this as bands of colored lights across the sky known as the Northern Lights.

What Makes the Colors?

The Northern Lights can display a range of colors from pink, green, yellow, yellow green, blue, violet and sometimes white and orange. These colors are caused by the interaction of solar particles with oxygen, nitrogen and other molecules in the atmosphere of the earth’s magnetic, polar regions.

Most of the time when particles collide with oxygen they produce yellow and green light. When these particles interact with nitrogen they will produce reds, violets and sometimes blues. What type of interaction with the solar particle can affect the color? Atomic nitrogen (N2) interactions will have a bluish result while a molecular nitrogen (i.e., more complex molecules that contain nitrogen) will have more of a violet-purple result.

What Makes the Crackle? 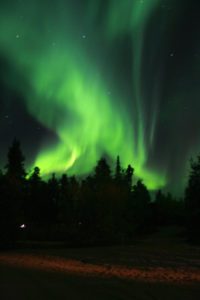 If you are lucky enough to not only see the Northern Lights but hear them make a static hiss or crackling, you’ve experienced the ultimate in Light shows. But what makes these dancing and raining light shows produce noise?

In 2012, Researcher Unto K. Laine of Aalto University proved that the Northern Lights were emitting sound from 230 feet (70 meters) above the earths surface. He and his team developed a scientific explanation for the sounds. A region of the atmosphere called an inversion layer is created after warm sunny days. Air temperature increases in the upper atmosphere instead of decreasing thus creating a lid, trapping colder air and negatively charged electrons below and positively charged electrons above this region of the air mass. When a geomagnetic storm or solar wind hits the Earth and Northern Lights form, the lid breaks open and the charge is released, creating the crackling sounds.

For many thousands of years Indigenous Peoples of the region believed the Northern Lights were spirits of their people in the sky. Additionally, the Inuit of Alaska believed that the lights are spirits of the animals they hunted: seals, deer, salmon, beluga whales, and caribou. Further south where Northern Lights can sometimes be seen in Wisconsin, Menominee Indians believed that the lights showed the way to Manabai’wok, the spirit giants of great hunters and fishermen. 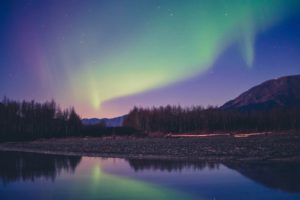 Myths, superstition and speculation about the Northern Lights date back 30,000 years to cave paintings in France with illustrations of the phenomenon. In early civilizations of Greece and across Europe, Northern Lights were believed to be the harbinger of wars, famine and destruction.

The astronomer Galileo Galilei in 1616 used the name aurora borealis to describe them referring to the mythical Roman goddess of the dawn, Aurora, and the Greek name for wind of the north, Boreas.

In New Zealand, the indigenous Maori people believed that the lights were reflections of their campfires or torches in the sky.

How to photograph the Northern Lights

Read more about our tips and equipment suggestions.

The most convenient, comfortable and best place to see the Northern Lights.

Learn more about our trips

Learn about the best time of year or day to view the Northern Lights here at Gangler’s.